A loooong time ago, Mallorca had a bit of a pirate problem. Who didn’t in the years 1200 – 1600s? Seriously. Especially with the famous Redbeard pirate (aka Hayreddin Barbarossa)

and his brothers. In 1530 Barbarossa captured the castle of Cabrera and set up camp there to use as his base. They would storm towns in Mallorca and if you were lucky they would only steal your possessions and burn your home. Not so lucky, they were killed or taken as slaves. Due to the constant menace of pirate attacks a series of lookout and defense towers were built across the island.

There were 84 towers built in the 16th century on the island but only about 50 them still exist today. Some are in good to great condition and some are deteriorating rapidly. The majority of them were built without foundations, the towers generally had between two and four levels and can be square, rectangular or circular in shape. The entrance was several meters above land and was reached by a rope ladder.

Joan Binimelis from Manacor designed a simple communication system of smoke signals during the day and fires at night. With it, neighboring watchtowers could be alerted, and the information was passed from tower to tower to the Almudaina in Palma.

I see these watchtowers all around Mallorca and while I knew they existed to warn villagers, towns, etc of pirate attacks I love learning even more about how they worked and when they were built. You can usually check out most of them. Some you can enter but most are closed up and you can just walk around it. Kinda like the one I like to hike to in S’Estanyol. I wrote about my hike to the lighthouse here but you can extend that and hike about 20-25 minutes more and get to the Torre de Estellella. It’s a non-strenuous walk along the coastline and the end site is worth it. Think of the history! The pirates! The people watching for those silly pirates! Arrggghh.

Here is how to get there:

S’Estanyol is a small town in the southeast of Mallorca, to arrive you would follow the MA-6015 to the end (arriving at S’Estanyol) and turn right. Park at the end of the road, after the S’Estanyol Club Nautico and get ready for your hike. Walk along the beach and you can either stay on the coastline or walk on a path through the pine trees. They smell so good! Follow the FAR signs. FAR is lighthouse in Catalan (faro in spanish). Just keep following that and soon you will arrive at the rocky coast where you will find this beautiful lighthouse.

We always like to stop here for a beer. A picnic is a wonderful idea too. To continue onto the watchtower just keep along the water walking away from S’Estanyol and towards Cala Pi. The path will curve to the right and soon you will have the watchtower in sight. 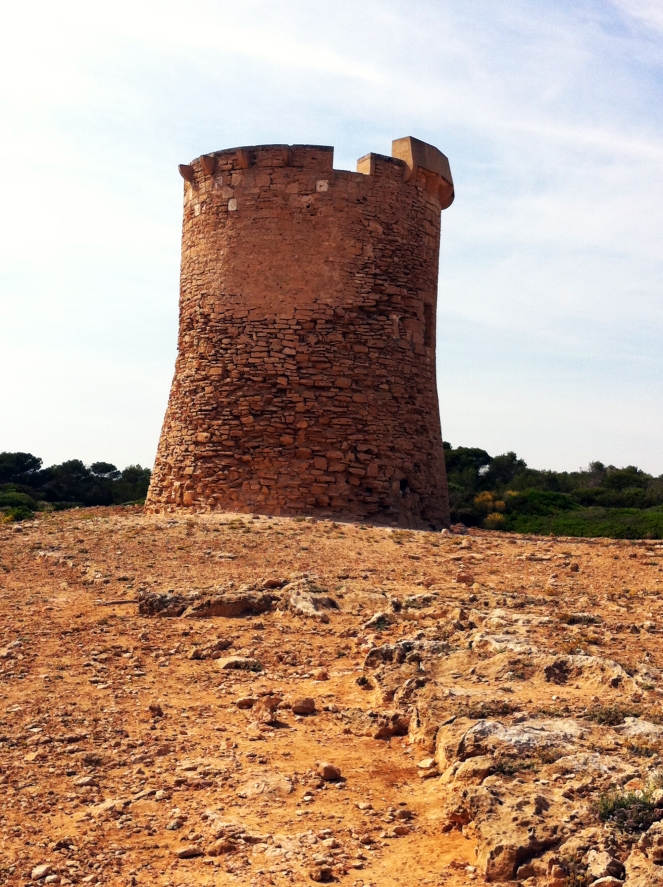 And the view towards the sea ain’t too shabby either. 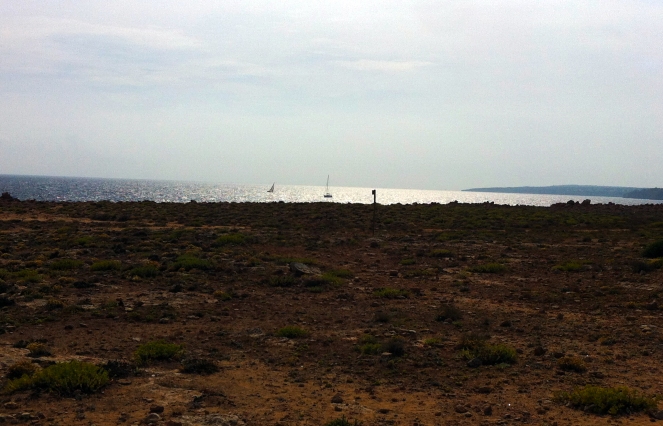 If these walls could talk. I would love to hear the stories!

And there you have it. If you are in my neck of the woods please stop by Torre de Estellella. We would love to see you. Don’t forget the camera and some sunscreen! See ya there.

One thought on “Hike to Torre de Estellella”

This site uses Akismet to reduce spam. Learn how your comment data is processed.