So it started off pretty uneventful. Caught the 8 a.m. flight to Paderborn, made a quick stop in Detmold to eat a brötchen with meerrettich (horseradish) Miree and I was off.

Felix bought me a fancy schmancy navigation thing (Navigon) and it was perfect! No worries on where to turn, was I supposed to take the A1 or was it the A5?? As I settled into the new car I jammed out to my CD mix of country and new downloads from iTunes, plus Felix downloaded the new Beastie Boys – yeah yeah right right. Okay! Just buy it already.

The ride was sweeeet! Nice car. I drove from 2 p.m. until about 10:30 when I spotted a hotel sign around the French town of Dommartin les Cuiseaux. Just look for the huge chicken statue (at the Aire du Poulet de Bresse) and you can’t miss it. It was a highway area with hotel (Etap), cafeteria, gift store, etc. I went to see if they had vacancy for lil ole me and the sign at the “front desk” directed me to go to the sandwich store. Even late at night there were three people waiting to get a sandwich, when it was my turn I asked for a room. “Oui, follow me.” An inexpensive 40 euros later and I was in my room.

I wasn’t expecting anything much, there were two doors in my room. One was for my port -o- potty looking toilet and the other with the similar look and feel, my shower. But my room!! Oh my gosh, much excitement to be held. 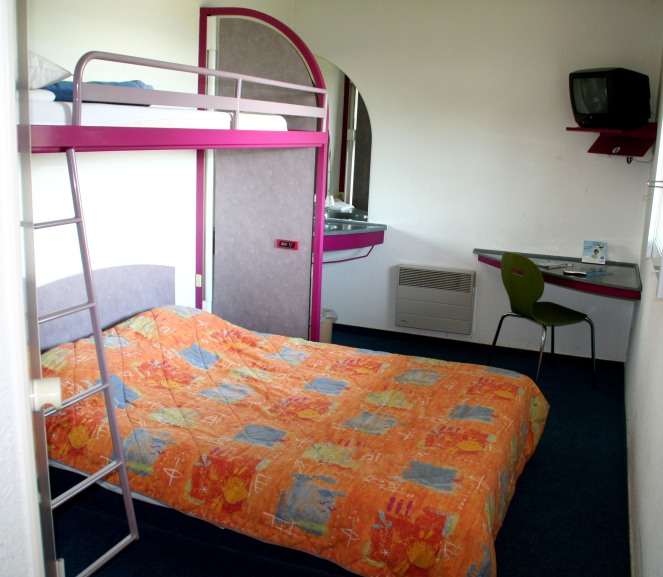 Are you KIDDING ME!?!? A bed AND a bunk bed!? I couldn’t decide, the bed seemed nice and comfy but how cool to sleep in a bunk bed, in France. Hmmm, I wonder what bunk bed is in french? Moment ~ lits superposés. Okay, I will never remember that. Next time in France, pardon, do you have una chambre avec les lits superposés? Ah yeah, that minor in french is really working for me now.  I was so overwhelmed with my sleeping arrangement choices that I switched every 15 minutes. (That is a joke my friends)

The next day I was up early and back on the road by 9:30. I was wanting to get to Barcelona at a decent hour to do a little shopping on Paseo de Gracia. I really needed a new bikini for the summer and a stop at Kiehl’s (LOVE) was in order.

I was in France for most of the day. The tolls! Don’t even get me started. For one, totally outrageous. I think I spent about 60 euros on tolls in France. But my most embarrassing (not to mention frustrating) moment was when I pulled into the line where I could pay with a credit card. When I got up there I put in my Visa. Spit it out. No toll gate going up. My other card. Nope. Then I see VISA and MASTERCARD with a line going through them. How is it possible they don’t accept Visa or MC? What is WTF in french? I pushed the help button. Nothing. I motioned to the people behind me (because of course there was a line forming) that I needed to back up. Or something. Did they have a gun? Not for me, for the machine.

This cute lil old man from the car behind me walked up to try to help. He spoke French to me, I spoke Spanish to him. (I was having a meltdown). FINALLY the gate raised. The gate controllers must have had a really nice laugh. You are welcome. The lil man said, “C’est bon!” I said “Gracias!” and I was back on my way. Note to all foreign travelers at all tolls – just go to the person in the booth.

Spain couldn’t get there fast enough. And then I was in Barcelona with billions of cars and 18 streets going off each round-about. Finally, I made it to the hotel, the Gran Torre Catalunya. From the outside it looks very uninviting, but it was a good price and for an extra charge of 10 euros I was bumped up to the 12th floor. I would have liked the view of Montjuic better but I didn’t mind what I had.

There is a restaurant on the top floor that overlooks Barcelona and a main transit station is almost next door. It is at a very busy area and I thought it would be louder but maybe since I was up on the 12th floor (instead of originally on the 3rd) it was quiet. Of course the occasional taxi horn here and there but you will get that almost anywhere in Barcelona. I tried to motivate myself to go to Paseo Gracia. I opened the minibar, had an Estrella beer, changed into my new maxi dress, sandles and left. I decided a brisk walk would be just what I needed, but after 20 min of walking I realized I still had at least an hour more to go and I changed my plans.

Plaza Espanya was close by so I headed back in that direction. Once I got there I realized the old bullfighting arena was there (no more bull fights in BCN) and I heard it was turned into apartments but there were people going in and out, so, I ventured in. It was … a MALL – Las Arenas. A really nice mall, lots of bright stores, a 12-screen cinema and at the very top was the rooftop terrace. From the terrace you could overlook Fira Montjuic and the Palau Reial while eating sushi or burgers or chinese. The view with my bowl of Miso soup:

I was up early again to find my way to the port. I won’t bore you with my frustration but this time Navigon was not helping, at least not at the minute necessary moments… But I made it! The last time I was on the ferry it was from Palma to BCN and it was in November. I figured it would be the same, no seating outside, just hanging out for eight hours wandering the expanse of the boat. But I was wrong! After my much needed late breakfast of salad, chicken and french fries all doused with vinegar I walked outside and at the end I found people sunbathing on cheap plastic white lounge chairs. There weren’t any chairs available by the time I discovered where everyone was but after watching two abandoned chairs I finally took one when nobody came back to claim them in 34.7 minutes.

It was me in my tanktop and rolled up pants surrounded by people in bathing suits (apparently I missed that memo), and naturally, the car convention.

And then finally after eight hours on the ferry, a sight for my sore, traveling tired eyes. Le Seu, the cathedral in Palma.

This site uses Akismet to reduce spam. Learn how your comment data is processed.